A Pre-Raphaelite Painting of Unknown Jews 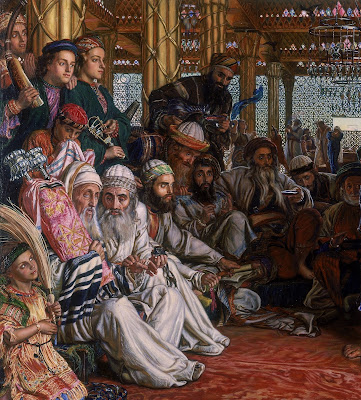 This image is cropped from a painting by the pre-Raphaelite artist William Holman Hunt. According to the (unreliable) book I found it in, Hunt began painting it in 1854 on a visit to the Land of Israel, but made slow progress because he wanted Jewish models for his Pharisees and “the local rabbi” ruled that sitting for such a painting was not permitted, so no one was willing to model. (Can we think about that for a moment – a pre-Raphaelite painter wants models and no one is willing to participate.)

“The local rabbi” eventually reversed his ruling; the book is fuzzy on the details but implies that the reversal was due to Hunt's claiming the final picture would not be religious. (If this is accurate, then Hunt lied egregiously.)
I am curious who “the local rabbi” was, and what the psak really was, and whether any of these anonymous 19th century Jews of Eretz Yisrael are identifiable.


Hunt, I am sure, took a fair degree of artistic license; and when he exhibited the completed painting in 1860 it was with a bitterly anti-Semitic commentary. But I am intrigued that – to whatever degree – his painting has preserved these Jews' faces for us.

Email ThisBlogThis!Share to TwitterShare to FacebookShare to Pinterest
Labels: Art, England, History, Israel, To See Ourselves as Others See Us